Vote For Us!
Campaign For Us!
Who voted for Kevin Phelps - KWQC 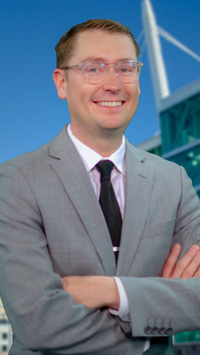 Kevin is no stranger to the Midwest even though he calls Chesapeake, Virginia his home.

He attended Creighton University, just west of the Quad cities on I-80 in Omaha, Nebraska where he received his B.S. in Atmospheric Science.

Shortly after graduating from Creighton, Kevin landed his first television job in Alpena, Michigan as the Chief Meteorologist for CBS affiliate WBKB. While with WBKB, Kevin was awarded Best Weathercast by the Michigan Association of Broadcasters. One year of record-breaking snow in northern Michigan was enough for Kevin and he moved to Joplin, Missouri as a weekend meteorologist/reporter for CBS affiliate, KOAM.

Now Kevin is happy to call the Quad Cities his home and looks forward to getting involved with the community as well as enjoying the relaxing summer days along the Mississippi. Some of his hobbies include: Golf, Soccer, and of course, Bluejay Basketball.