Vote For Us!
Campaign For Us!
Who voted for Whataburger 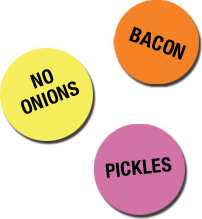 Whataburger® restaurants have been serving hot, fresh burgers and other delicious food in Longview and Marshall, Texas since 1965. You probably know that a Whataburger®hamburger is second to none - made from 100% pure American beef and served on a big, toasted, five-inch bun with all the "extras" to suit your taste. That's the secret of Whataburger's fame and popularity. It's about your taste, so we custom make your burger - just like you like it. Maybe that's why people who really love hamburgers make Whataburger restaurants a family tradition.

And that's just our hamburgers! A lot of folks in Longview and Marshall, Texas have come to make Whataburger their breakfast stop. We serve breakfast from 11:00 at night to 11:00 in the morning. That's right, 12 whole hours when you can get your favorite Taquito, biscuit, Breakfast On A Bun® or hearty breakfast platter.

So, visit a Whataburger near you today. Dine in or take out anytime, 24 hours a day, 7 days a week. We'll be ready to serve you. There's nothing quite like a hot, fresh, made-to-order Whataburger. Just one bite and you'll say, "What-A-Burger!"

About Whataburger of East Texas

Our story began when a good East Texas family man, known as Sam Black, opened the first Whataburger in Tyler in 1955. Known to the company as "Unit 32," Mr. Black's restaurant was only the 32nd Whataburger to open its doors anywhere. This made him one of the earliest Whataburger franchisees.

As sure as Whataburger Unit #32 set the tone for East Texas, Mr. Black's daughter and son-in-law, Roy and Phyllis Haase, carried that tradition forward through the years, opening all of the Whataburger locations you enjoy today in Longview and Marshall. Whataburger Unit #38 opened in 1965 off Spur 63 in Longview. Unfortunately, a fire destroyed the building in 1991. Showing the grit and determination of the Haase's, the store was rebuilt from the ground up in a record-setting 30 days!

In 1969 Roy and Phyllis Haase purchased Whataburger Unit #48 at 2010 Victory Drive in Marshall. It is one of the original "A" frame buildings – a Whataburger trademark. Unit #48 on Alpine Drive in Longview opened in 1972 and featured the very first Whataburger drive-thru window. The Haase's purchased and opened many more units through the years – 16 locations in all – with the latest one (Unit 978) opening on Highway W 80 in White Oak. Plans are being made for further expansion in the market, so don't be surprised when you pass a brand new Whataburger!

No matter how many units we open, you can be assured that Whataburger of East Texas will always approach our business with the same Christian values upon which we were founded. Yes, our company strives to serve great food day in and day out, but we also feel that our responsibility as a company and as East Texans goes way beyond that. We hope you always find delicious food in an atmosphere of genuine respect and care when you visit any one of our locations in East Texas. That's what you deserve.